With the name of Allah, the most compassionate, the most merciful

America has been turned into a paranoid state! A young boy was arrested for making a simple clock at home which he showed to his teacher proudly. The teacher instead of praising or appreciating as the boy expected; sent the kid straight to the jail handcuffed! The boy Ahmad Muhammad happened to be a Muslim! This incidence painfully shows the severity of the illness America is suffering from! Why this illness?

It’s an undeniable fact that America is held hostage by the Zionists who through their various organizations, institutions and media have tied tight ropes around its body and snatched the eyes, ears and tongue. Americans are deprived of seeing, hearing and hence speaking truth. There are however a few exceptions! But this is not without price. President John F. Kennedy was shot dead when he spoke against secret organizations like Freemason, and Michael Zebuhr who was murdered on March 19, 2006 (Photo below) for being a student scholar for digging out truth related to 9/11. All evidences prove that 9/11 was an Israeli act in collaboration with USA Zionists and key members of US administration including President of America himself. 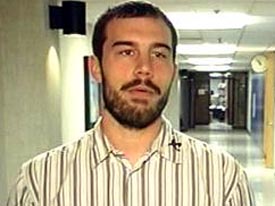 Solid evidences point out that on 9/11 it was pre-implanted dynamites doing controlled demolition! The airplanes hit was an orchestrated Israeli drama to deviate attention and entrap Islam and Muslims who had nothing to do with the incidence. The world Trade Center was also previously attacked by an undercover Mossad agent Josie Hudas whose New York apartment containing bomb drawing and bomb material was shown on CNN breaking news! But in that incidence Josie Hudas was left off the hook and instead her innocent driver Muhammad Salameh was given 86 year imprisonment. Salameh was framed by Hudas as he was her servant driver and on her orders rented a van for her. She without his knowledge used the van to cause a blast killing 5 Americans. Despite all the evidences she was allowed to leave US and go to Israel and live there. The media at that time also did a massive brainwashing of Americans holding Islam and Muslims as culprit. In the words of Salameh’s Government provided lawyer that was the biggest massacre of justice in the history of America. So Americans were “primed” with massive anti Islam propaganda! To read more about this perpetual anti Islam propaganda by the Zionists etc. please read the best selling “They Dare to Speak out” by ex-congressman Paul Findley who himself was intensely brain poisoned against Islam from school days!

The attack on World Trade Center was done to create a justification for USA attack on Afghanistan to restore billions of dollars of Afghan heroin which had came to standstill as a result of Mullah Omar’s strict ban on heroin growth as all narcotics including alcohol and heroin as absolutely banned in Islam. The Zionists and CIA which thrived on heroin money were in deep trouble and were having severe epileptic fits because of heroin deprivation. Talibans were invited to American as show in 9/11 Fahrenheit movie of Steve Moore. But Mullah Omar rejected billions $ bribe and also did not succumb to the pressure of Bush administration who apparently threatened them to send to stone ages! It should be also noted that OBL had strongly condemned and denounced 9/11 calling it absolutely anti Islamic (Daily Ummat Karachi 9/12/2001). Now needless to say NATO controlled areas in Afghanistan are annually producing more than 62 billion $ heroin (UNO report) and there are truckloads of heroin direct from Afghanistan into the veins of the Western youth and Zionists controlled Drug Mafia’s hands are full of money both from heroin war related business and also of course from uncountable human blood!

To defame Islam and Muslims Zionists created many fabricated videos using actors. In this regard Israeli citizen Rita Katz is most notorious. She had created an organization named SITE. She uses actors to be OBL and other so called al-Qaeeda leaders (As a matter of fact al-Qaeeda, Boko Haram, ISIS and Islamic State are all Zionist creations and interestingly Quran being divine had condemned Qaeda at several places 1450 years back and as Quran is the living miracle; only book thats preserved word by word in its original language for last 1450 years and still as fresh today as was then).

Just have a glance of OBL’s pictures on the title pages of 2 leading USA weeklies. Compare the two and you will immediately identify the false OBL on Newsweek’s title. This picture is taken from a video released by Pentagon. Rita Katz is also shown in the picture below. 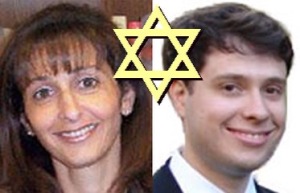 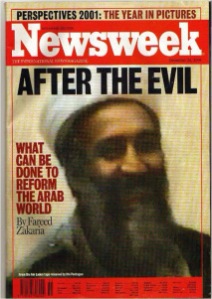 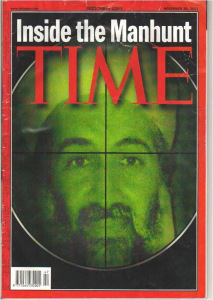 We here have a question for you ; do you wonder why Zionists are so much against Islam??????????

The answer is simple. In the past Zionists tried to kill Jesus (peace be upon him) but in reality the God all Mighty saved Jesus and the Zionists got deceived as clearly and vividly described by the closest disciple of Jesus Saint Barnabas in his Gospel and Quran also very emphatically and assuredly states that Jesus was not killed. The arch enemy of Jesus Rabbi Paul then played a very dubious and tricky game of killing Jesus message  though inventing Jesus worship!. Son of God myth was adopted from earlier one Jewish tribe’s belief of Prophet Uzair being son of God. But…. again Zionists failed as the God alMighty saved the life of Jesus and message of Jesus in a book which no one can change i.e. Quran absolutely dust and rust free. Indeed Quran is the best place to visit and meet Jesus, his virgin mother Mary, his maternal grandmother and his maternal uncle etc as well as all previous Prophets from Adam, Noah, Abraham, Isaac, Jacob, Joseph, Moses, Aaron, David, Solomon etc.  This then explains Zionists frustration over Quran; the most fundamental book of Islam. They know that this book can end Zionist slavery of the world. And of course Zionists do not like to end their control of the world. They see clearly an end to their New World Disorder. This explains everything from Israeli gross global terrorism to individual killings and imprisonment of innocent Dr. Aafia, Muhammad Salameh and of course the Clock boy Ahmad Muhammad!

A Board Certified Pathologist, Doctor, Writer, have keen interest in serving humanity and spreading the light of truth View all posts by drhaque